By: n4aOn: 03/23/2018 18:21:51In: Policy & Advocacy
The House and Senate approved the FY 2018 omnibus bill, which includes significant increases for several OAA programs and has thrilled advocates and SHIP champions who exhaled at the news of continued (and boosted) funding. After threatening to veto the bill earlier this morning, the President signed the bill this afternoon.

“This funding bill is great news for older adults and their caregivers, and the increases it includes will improve the capacity of local aging programs to effectively meet the needs of our nation's rapidly growing aging population,” said n4a CEO Sandy Markwood in a statement.

She continues, "Given the projected growth in the aging population, it is essential that we continue to increase funding for OAA and other aging programs to ensure that we keep the country's longstanding commitment to help its citizens live with dignity and independence at home and in their communities. The increases included in this funding bill represent the first step in that process.”

For details on the spending measure, including n4a's appropriations chart, see our March 22 Legislative Update.

Stay tuned for tips on thanking your congressional delegation for these vital increases, and get ready to advocate again, as the FY 2019 appropriations process has already begun! And don't forget to register for next month's n4a Aging Policy Briefing in D.C.!

Voting Resources for Older Americans and People with Disabilities 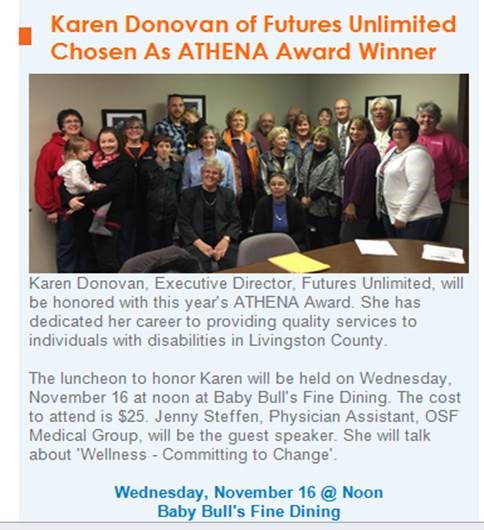 Karen Donovan is also a member of the ECIAAA Corporate Board,

The Illinois Aging Network is comprised of many different organizations with the shared goal for directly helping older persons in their own homes and communities.  The Illinois Department on Aging is the leader for the aging network through its support of services, programs and public policy for Illinois.

Obviously, the aging network has been on the ropes this past year.  Home care, emergency response system companies, and adult day agencies serving the over 40,000 people in the Community Care Program who do not qualify for Medicaid at last received payment through the Stop Gap Legislation for the period July 1, 2015 to June 30, 2016. But these agencies are currently not being paid for this client population going back to approximately July 1, 2016.  That is because the Stop Gap offered approximately $300 million to cover services over an 18 month period that actually costs $500 million.  The Department on Aging has enforced contractual requirements that home care agencies must serve both the Medicaid eligible and those people who are currently not on Medicaid, even though payment is being processed only for those on Medicaid (through court action).

We understand that CJE SeniorLife informed the State earlier this summer that they are no longer offering home care services - not only because the payments for non-Medicaid clients stopped again at the beginning of the state fiscal year, but also because their costs to provide services in Cook County has consistently exceeded the state rates, and no relief for those extra costs was in sight, possibly for years!

On another note, planning for the separation of the Medicaid and non-Medicaid clients is proceeding at the Department on Aging through the proposed Community Reinvestment Program.  Information on the Department’s plan is expected later this week.

We ask that the Illinois General Assembly pass, and the Governor sign a budget with adequate resources, in order to assure that the loyal organizations that are willing to deliver services are paid for their past service, and are then offered strong rates to assure continued services into the future. The Aging Network believes in Illinois and deserves payment for their outstanding efforts to help older and disabled persons.

Distributed for I4A by: