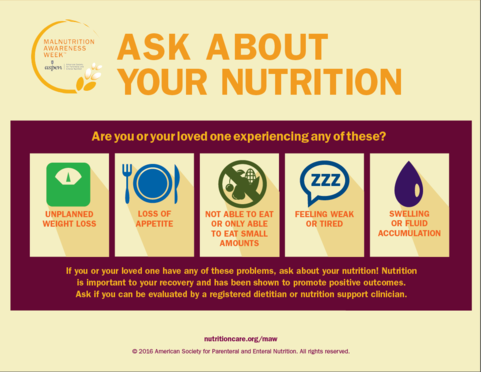 By Holly Kellner Greuling RDN, National Nutritionist for the Administration on Aging

Senior Malnutrition in our country is an epidemic hiding in plain sight. It is estimated that almost 50 percent of older Americans are malnourished. During Malnutrition Awareness week let’s commit to ending this problem.

Many inter-related factors can contribute to malnutrition. Some elderly people may live in a food desert and may not be able to buy nutrient-dense food. Some may not have the stamina to cook a meal or may not want to cook because they are feeling down. Others may not eat because they do not feel well enough to eat.

Many people are surprised to hear that malnutrition in our country is usually not due to a lack of funds to purchase food. But if you know someone who struggles to eat well for financial reasons, help is available. The USDA’s Supplemental Nutrition Assistance Program (SNAP) can help people determine whether they qualify.

Malnutrition is defined as a nutrition imbalance that affects both overweight and underweight individuals and it sneaks up on people. Because malnutrition generally occurs over time, you cannot suspect malnutrition from just looking at someone. That is why malnutrition hides in plain sight.

Fortunately, there are changes that you can watch for that serve as clues:

Malnutrition greatly affects one’s abilities to remain healthy, especially when faced with a serious health situation. In fact, approximately 30 percent of older people admitted to the hospital arrive malnourished and being malnourished while in the hospital will generally increase the length of stay.

The Aging Network created through the Older Americans Act has provided community-based nutrition programs that help sustain the nutritional status of older adults since 1972. The network has the knowledge to address senior malnutrition within the community and can partner effectively with local providers and health care organizations that serve older adults. And we know these programs work: In recent surveys, 76 percent of people who participate in meals programs at senior centers and in other group settings indicated that they eat healthier foods and that their health has improved as a result of the nutrition program. Eighty-four percent of the people who receive home-delivered meals indicate the same.  To read more, click here.

On Saturday, we will join communities around the world in observing the International Day of Older Persons. October 1 was designated by the United Nations in 1990 to recognize the vital contributions of older people to the global community and to encourage member nations to thoughtfully address the aging of the population. At the Administration for Community Living, we are working to ensure that this includes the supports and services necessary for older people to live and contribute in their communities.

This year, the United Nations has designated the 2016 International Day of Older Persons theme as, “take a stand against ageism” in order to draw attention to and challenge negative stereotypes and misconceptions about older persons and aging. Ageism is the systemic stereotyping of and discrimination against people because they are considered old.

The international community has officially recognized the harmful consequences of ageism as a matter of human rights. In 2014, governments around the world adopted a resolution (E/RES/2014/7) at the United Nations Economic and Social Council that recognized ageism as “the common source of, the justification for and the driving force behind age discrimination.”

In the United States and around the world, too often we see limited and stereotyped depictions of older people and of aging. Many of these messages center on the notion that seniors are burdens to their families, and that aging places economic strains on countries.

While it is true that many older adults experience poor health as they age, it also is true that many enjoy good health far longer than people once could expect. Combined with extended longevity, this means that older people are increasingly found in the workforce, playing key roles in their communities, and providing care and support to family members. Many need some help with the tasks of life as they get older, but in many cases, older adults are providing this help to others in their families and communities. Let’s work together to make sure these stories are told, and that older adults’ contributions do not continue to be overlooked.  To read more, go to, http://www.acl.gov/NewsRoom/blog/2016/2016_09_29.aspx.