HHS Deputy Secretary Eric Hargan and ACL Administrator Lance Robertson arrived at the Walter Reed Community and Senior Center in Arlington, VA just before lunch time, and the center was full of activity.

"Let's do this," a man said as he prepared to take a shot at the pool table. In the gym, the 55-and-over basketball game was gearing up. Down the hall, the intermediate line dancing class practiced a dance choreographed to Alec Benjamin's "Let Me Down Slowly.”  Next door, Blanche Kirchner led a painting class, as she has for 40 years. At 97 years old, Kirchner is Arlington County’s longest-serving employee.

Hargan and Robertson were visiting the center to help kick off National Nutrition Month®. The center is one of thousands of senior centers, churches, schools, and other community spaces serving meals through the congregate meals program established by the Older Americans Act. Together, these programs serve more than 75 million meals a year to over 1.5 million Americans.

As many as half of older Americans are malnourished or at risk of being malnourished, and nearly 5 million Americans lack consistent access to enough food for a healthy life. With food insecurity and malnutrition associated with a variety of negative health outcomes, including more frequent and longer hospitalizations, the congregate meals program plays an important role in helping older adults remain healthy and independent.

In fact, 58% of participants say that the meal they receive through the program provides at least half of their total food for the day. A 2017 evaluation found that participants in the program have better diets and are less likely to face food insecurity compared to similarly-situated older adults not participating in the program.

While nutrition is the most obvious benefit of the meals programs, the older adults at the Walter Reed Center would be the first to tell you they are getting much more than lunch.

"When I'm here, I talk with everybody," said Lem Lem Ekoubegize. "I love it. I don't want to miss it."

She is not the only one. 80% of congregate meal participants surveyedby the National Association of Nutrition and Aging Services Programs said they had more friends after joining the program.

"A big problem that we see is that older Americans often become socially isolated from each other," Hargan said while visiting the Walter Reed Center. "So a center like this, where people come for the food but they stay for the company, is really important."

Like malnutrition, loneliness and social isolation can have grave consequences for older adults' health. For example, social isolation is associated with higher blood pressure and earlier onset of dementia. Older adults who are socially isolated also face a greater risk of being targeted for abuse, neglect, or exploitation.

The meal programs also often serve as a gateway to other important services and activities. More than two-thirds of congregate meal providers also offer other activities for older adults, with more than half offering at least 25 hours of activities a week. Seniors who drop by for meals often stay for these activities and have the opportunity to learn about services and programs they otherwise may not know about, such as heating assistance or prescription drug assistance programs.

The combination of nutrition, socialization, and connection to other resources and activities may help explain why participating in a congregate meal program leads to better health and a greater likelihood of staying in the community.

Ekoubegize participates in Tai Chi and monthly health and wellness sessions led by doctors, nurses, and nutritionists. Recently, her primary care physician told her she was in good health and asked what she was doing to stay healthy.

"I'm listening to the (people at the Walter Reed Center) who come for my health," she recalled telling her doctor. "Whatever they tell me, I do it."

These health improvements can result in a better quality of life for seniors. They also save money for programs such as Medicare and Medicaid.

"(Seniors) want to be able to be in their homes but they also want the opportunity to be able to socialize, to meet other people, to do these activities, and also to have a meal," Hargan says. "It’s a great thing, and it does help with our stewardship of taxpayer dollars as well … It's really a win-win."

"We know that the lonely and sedentary lifestyle is harmful," said Cheng Ping Feng, who participates in the Walter Reed Center's congregate meals program. She says the meals and other activities at the center allow older adults "to choose the active way."

Across the country, ACL partner organizations are hosting educational events in recognition of American Heart Month. In Georgia, Open Hand Atlanta offers a tailored nutrition-focused heart health class at local senior centers throughout the month of February. In Utah, Salt Lake County Aging and Adult Services is promoting American Heart Month by providing opportunities for blood pressure screening and a heart health presentation in each of their 16 senior centers. Additionally, the senior centers are encouraging older adults to attend at least three physical activity programs, including evidence-based interventions such as EnhanceFitness, Tai Chi for Arthritis, and the Arthritis Foundation Exercise Program. And in New Jersey at the West Windsor Senior Center, older adults can participate in carotid artery and blood pressure screenings, as well as ongoing physical activity programs.

ACL also supports the delivery of evidence-based chronic disease self-management education programs (CDSME) in communities across the country. CDSME programs provide older adults and adults with disabilities with education and tools to help them better manage chronic conditions, including cardiovascular disease. More than 383,000 individuals have participated in these impactful interventions since 2010. The most common chronic condition reported by program participants is hypertension (41%), and one-third of participants reported having high cholesterol. Further, 13% of participants reported a diagnosis of heart disease, and 5% indicated having had a stroke.

Finally, the Carter Burden Network, one of ACL’s Innovations in Nutrition Programs and Services grantees, is addressing the high cardiovascular risk of uncontrolled hypertension among older adults by testing a multi-component intervention that includes the DASH Eating Plan.

Visit healthfinder.gov to learn how you can spread the word about American Heart Month.

ACL is pleased to announce an approximately $3 million investment to continue efforts to develop tools and infrastructure to support states in building the Adult Protective Services (APS) of tomorrow.  Over the next three years, ACL will undertake the following tasks:

The investment is the result of a partnership between ACL’s Office of Elder Justice and Adult Protective Services and ACL’s Office of Performance and Evaluation.  This work will be carried out by New Editions Consulting, Inc. (a woman-owned small business), and is part of ACL’s ongoing commitment to support the development and evolution of APS systems, and to strengthen APS’ capacity to address the abuse, neglect, and exploitation too often faced by older adults and adults with disabilities.  These projects further ACL’s vision for older Americans and people with disabilities to be able to live where they choose, with the people they choose, and fully participate in their communities without threat of abuse, neglect, or exploitation.

Visit the Protecting Rights and Preventing Abuse section of the ACL website to learn more about these efforts. 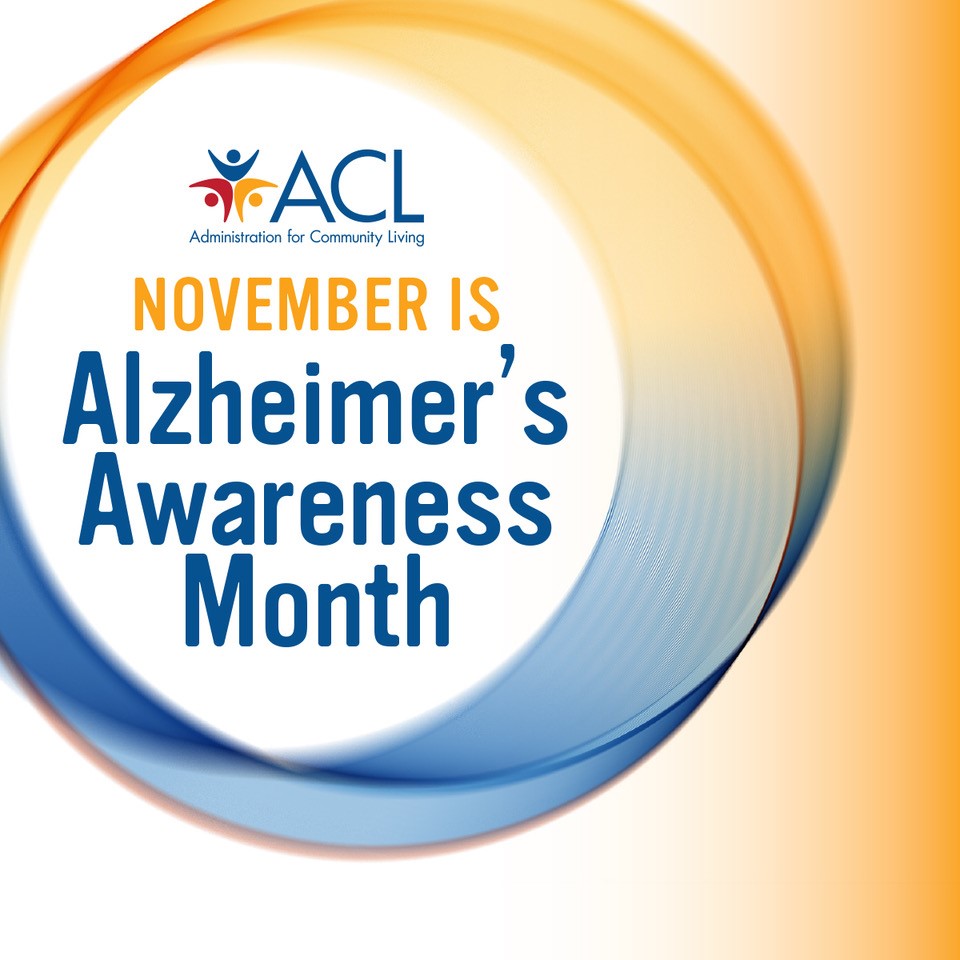 November 2018 marks the 35th anniversary of National Alzheimer’s Disease Awareness Month. In the 35 years since the original call to build awareness of the disease, we have learned a lot about people living with Alzheimer’s disease and related dementias (ADRD) and caregiving. The Administration for Community Living continues to advance the dementia capability of states and communities through its grant programs and the work of the National Alzheimer’s and Dementia Resource Center (NADRC).  Each year the NADRC develops resources to support grantees and the general community in their work with individuals living with Alzheimer’s disease and related dementias and their caregivers.

The fundamental principle ACL was created around is that all people, regardless of age or disability, should be able to live independently and fully participate in their communities. We are pleased to announce the following available resources:

Handbook for Helping People Living Alone with Dementia Who Have No Known Support provides practical guidance as well as tools for helping a person living alone who does not have informal supports, including people with dementia who have a caregiver that cannot provide support. The handbook includes practical strategies for identifying people who are living alone without support, assessing risk, building trust, identifying family and friends willing to help, determining decision-making capacity, options for helping the person maintain their independence, and the basics of guardianship or conservatorship.

Working Together: How Community Organizations and First Responders Can Better Serve People Living with Dementia helps community organizations collaborate with first responders to better serve people living with dementia, a need increasingly recognized by first responder agencies. This guide explains why this issue is gaining attention, provides strategies for building successful partnerships, and describes the types of programs that can benefit people living with dementia. Also included are resources such as training materials, sample policies, tip sheets, and more.

The second prong of this grant will fund a short-term project to better understand long-term care facility residents’ experiences with pain management. This will include an examination of the use of opioids, causes and results of opioid misuse, and how drug diversion, and other consequences of opioid misuse by others, can impact residents. Obtaining the perspective of people living in nursing homes and residential care communities will be an integral part of this project.