IMPORTANT: Molina HealthCare of Illinois MMAI coverage will end on 05/01/2017

This Molina Action affects Macon and Piatt Counties beginning May 1, 2017

What are my options?

Weigh in on ACA Repeal Next Week!

We need your help!

In case you missed our last e-mail, Cohen Children’s Medical Center is conducting a national study focused on grandparents raising their grandchildren. The number of children in “grand-families” has increased dramatically in recent years, and studies suggest that this responsibility poses unique challenges to grandparents who assume this role.  We at Cohen Children’s Medical Center are conducting a national study and would like to hear from as many grandparents as possible.

Please… forward this information about our research study to any and all grandparents raising their grandchildren.

We are asking grandparents that are raising grandchildren to complete an anonymous, on-line questionnaire at www.GrandparentingResearch.com.  Our research study has been approved by our Institutional Review Board.  (A copy of the IRB determination letter is available on request).

Thank you for assistance in sharing information about our research study with grandparents raising grandchildren.  Of course, we would be happy to answer any questions you may have.

Research Assistant, on behalf of

Following Donald Trump’s victory in November and the request of the incoming Trump Administration, Republican leaders in Congress deferred major decisions on FY 2017 federal funding by passing a bill late last week to extend current funding levels until April 28, 2017. This strategy, known as a continuing resolution (CR), means that federal agencies and programs have funding certainty through most of April. However, a priority item for the 115th Congress, beginning in January, will be to figure out a longer-term funding strategy for a fiscal year that will be half-over by the time the next funding deadline arrives.

What Does a Continuing Resolution Mean for OAA and other Aging Programs?

Passage of the CR holds some good news for advocates who were concerned about the Senate’s proposed elimination of the State Health Insurance Assistance Program (SHIP) and cuts to senior employment programs. Approval of the CR means that those cuts are off the table—at least in the near-term. However, the CR also means that House-proposed increases for some OAA programs, including Title III B Supportive Services and Title III C Nutrition Services will not be a reality in the near future.   I

n order to stay under the budget caps for FY 2017, which were established in the 2015 Bipartisan Budget Agreement, an across-the-board cut of 0.19 percent was included in the bill. How this cut will be distributed across programs, however, will be determined by individual agencies, so we don’t have details at this point about what ongoing funding levels for OAA programs will be.

The move to punt finalizing FY 17 funding until the spring means that the 115th Congress will have homework from the current Congress. The incoming Trump Administration, eager to have a say in spending levels, asked leading Congressional Republicans to leave long-term decisions about FY 17 until next year.

However, this move also complicates the list of necessary legislative action early in the new year. Not only must Congress work to either finalize or further extend funding for the current fiscal year, but as of early spring, lawmakers on the budget and appropriations committees will begin their annual work to work to determine funding levels for FY 2018 as well.

Congress and the Trump Administration will also have to deal with the politically contentious move to increase the country’s borrowing authority when the current debt ceiling is reached in March. Additionally, the current budget agreement, which raised the budget caps for FY 2016 and FY 2017, expires at the end of FY 17, and lawmakers will have to decide what—if anything—to do about drastically lower spending authority next year for federal defense and non-defense discretionary programs.

We also expect to see another layer of complexity in early year spending negotiations as lawmakers consider the unusual possibility of passing two Congressional budget resolutions next year. Doing so would prompt two opportunities to use a complicated budgeting process, known as reconciliation, to pass controversial, but filibuster-proof, legislation. We expect Affordable Care Act repeal (and possibly broad structural changes to the Medicaid and Medicare programs) could be achieved through this process next year. If lawmakers proceed with that strategy, we would anticipate ACA repeal early in the year through a budget reconciliation process for FY 2017 (the current budget year) and possible FY 2018 reconciliation proposals in the late summer or fall detailing other major changes to Medicaid and possibly Medicare.

What Can Aging Advocates Do?

At this point, predictions are, at best, just that—predictions. We are not sure of the exact course lawmakers will take to both finalize federal funding and make major changes to health care programs. However, we do know it is more critical than ever that local aging advocates weigh in with lawmakers and stress the need to protect and adequately funding OAA programs. It is also critical that we keep up the drumbeat about the need for funding increases for OAA and other aging programs. Stay tuned for updates about the FY 2017 and FY 2018 appropriations process as they are available, and continue to contact your Members of Congress with these important messages!

On November 16 we will launch a national campaign, in collaboration with the AARP Foundation, to spread the word about the growing problem of social isolation and loneliness affecting millions of older Americans. It is estimated that one in five adults over age 50 are affected by isolation, a problem that has been associated with higher rates of chronic disease, depression, dementia and death.

This topic will be the focus of the annual Eldercare Locator Home for the Holidays Campaign, developed to encourage discussion of important issues affecting older Americans at a time of the year when family and friends often gather together. 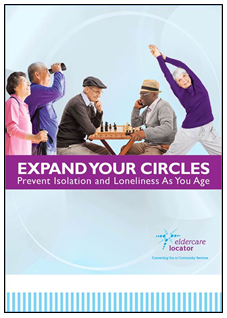 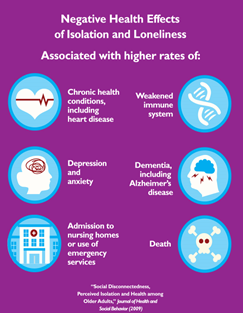 This year's campaign features a consumer brochure: "Expand Your Circles: Prevent Isolation and Loneliness As You Age" and a toolkit providing you with all of the resources you need to support the campaign in your community.

To help us better understand how the problem of social isolation and loneliness affects your clients and if you would like to participate in this campaign, please complete this very brief quick-poll: https://www.surveymonkey.com/r/V6CJH2F

Given the vital role of the Aging Network in providing crucial home and community-based services and supports for older Americans, AAAs are uniquely positioned to shine a light on this growing problem and to lead the way in finding solutions.

Please join us! If you would like to learn more about how you can participate, please contact n4a Communications Director Dallas Jamison at 202.872.0888 or This email address is being protected from spambots. You need JavaScript enabled to view it..